Shelley Duvall in Robert Altman’s 1977 movie, 3 Women, is leaving me with a lemon chiffon feeling. What’s so inspiring about her fashion in this movie is that it came from her closet. No stylist required. She simply is who is she and works that look out according. Ironically the plot of 3 Women is about ripping off some bitch’s look a person’s personality. That’s right. A wash and repeat. There’s nothing like being out at the club and seeing someone washing and repeating your look like shampoo. It’s a no-can-do.

But I digress about my dress, but I know there’s a lot of heads out there shaking yes. We know who we are. Don’t copy. Go out and make your own finger painting.

Shelley met director Robert Altman at an art show in LA where she was promoting her boyfriend’s art at the time. Altman didn’t think her southern-down-home-mixed-with-hipster-chic style was for real. He thought she putting on an act. After 3 or 4 screen tests, he was convinced otherwise. They worked together on 9 films, including this one, which Altman confesses, was thrown together as it went along. The premise of the film started with a dream Altman had when his wife became ill. It won Shelly national acclaim as an actress – and made me hit the floor and genuflect: 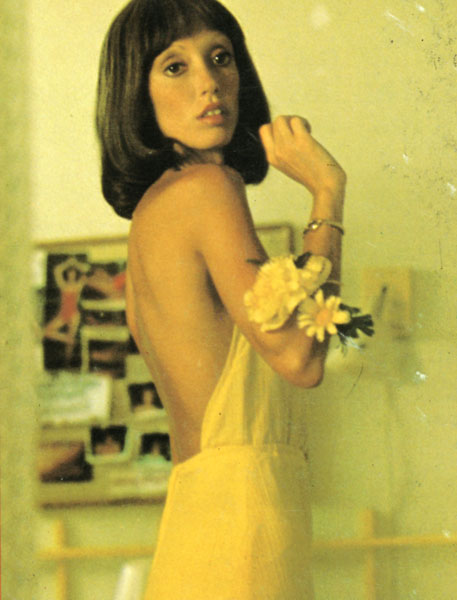 Later, Shelley bounced her fashion all over the Overlook hotel giving us Aspen-with-an-ax-chic in Stanley Kubrick’s The Shining – but that’s so winter 1980 so I’ll pass on boring you explaining it further.

This entry was posted in Uncategorized and tagged 3 Women, Hall and Oats, Robert Altman, Shelley Duvall, The Shining. Bookmark the permalink.