A Bit About Bravery. 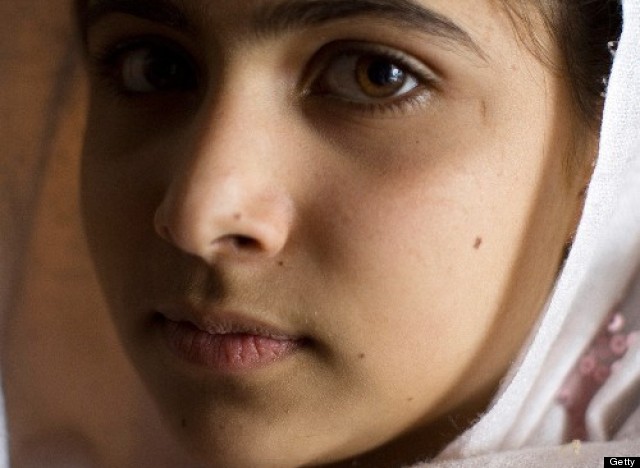 Malala Yousafzai, the Pakistani schoolgirl who was shot in the head by Taliban gunman is still in critical condition after being taken to Queen Elizabeth Hospital in Birmingham for treatment and safety.

Malala who is only 14, was shot in the head and neck after Taliban gunman boarded her school bus, calling the teenager out by name before attempting to take her life. Two of her classmates were also hurt. Yousafzai has been speaking out about Taliban oppression  and the educational rights of girls since she was 11 years old. In her blog, she documents her experience saying “I dreamt of a country where education would prevail.”

In a move that I’m still not able to wrap my head around, Madonna took to the stage in Los Angeles over the weekend and performed a strip tease in Malala’s honor. Revealing the news of the attack on 14-year-old Malala Yousafzai had “made her cry” she asked the crowd: “Do you understand the sickness and absurdity of this?”

Madonna then took off her clothes where the girl’s name was written on her back.

I suppose that’s one way of getting the story out. On the other hand, I’ll say it was a bit in bad taste to turn nudity into a platform for girl’s education. Sex before smarts seems to be a message heard loud and clear in the hallways of American schools. With Malala, who’s bravery is so palatable, maybe Madonna could have found a different way to have her message heard. After all, she seems to be a little self-conscious about her age and relativity these days. Which is sad because she’s Madonna and growing old mighty gracefully. Using this little girl’s demise to spotlight herself is tacky at best. But she’s Madonna and who the hell am I to say anything. Good PR is free PR and Malala’s story needs all the PR it can get.

I am so unbelievable touched by Malala. She speaks a wisdom well beyond her years. When I see someone so young able to communicate and inspire the way she can, it really gets me thinking about past lives and the rebirth of important souls. Malala’s soul is one of a warrior and the depth of her conviction in the face of such imminent fear makes me believe that grace works through people. I’m so lucky to be able to witness this type of divine provocation in my lifetime. Malala, through her simple cause of women’s education, is quickly becoming the catalyst for her nation to change. I think of her everyday and hope she makes a full and glorious recovery – she has much more work on this earth to be done.